When we get into the rationalization of all compulsions, you will observe that the methodology for dealing with all of them is almost the same. Why, you would ask. If you observe how your ROCD works on you systematically and repeatedly, you realize that repetition of your obsessive thoughts and compulsive behaviors is largely instrumental in strengthening your ROCD. You have the same thought, you learn through trial and error to perform a specific physical or mental compulsion, and keep providing the same compulsive response every time you have the thought. After a point, the compulsive response to the thought goes on auto-pilot. This leads to the compulsive response becoming a habit that is difficult to break.

Hence, when we respond to the compulsion, we need to pay our ROCD back in the same coin – through repetition. Repeating the response prevention script, both in the triggered and non-triggered states repeatedly will enable better internalization. Sort of like the multiplication tables that you learn through repetition. You read and re-read and memorize the multiplication tables when you can, so that you are able to remember them when you need them. Similarly, when you read and re-read the response prevention script repeatedly, you may be able to access it when you need it, irrespective of the compulsion your ROCD forces you to do. For that, we have to train and rewire the brain.

Our brain has an amazing property called neuroplasticity. Simply put, neuroplasticity is the ability of the brain to break old habits and form new ones. No matter what our age, we can always learn new skills and forget old habits that do not serve us. However, the brain needs to be rewired to form new habits, which takes time. If you want to learn football, you must constantly go to the field and practice. The more you practice, the better you will get at it. Or even if you want to learn cooking, you cannot become an expert at it in one day.

Depending upon what we have been doing all our lives, which actions we have been repeating, which actions we have stayed away from, our brain gets wired. The things we do often, become easy for us. We do not have to think about them, while doing them. This includes both good habits and bad. Like, brushing our teeth. We do it every morning and evening. We have been doing it for years, so we know how to do it. We don’t have to think about it. But some of our activities may be relatively new and we may not have gotten into the habit of doing them yet. That is to say, our brains have not yet been wired for those activities yet.

Consider figure 3.6.1. It is of a well-trodden path. Before this path existed, there may have been shrubbery growing here. But with constant use, a 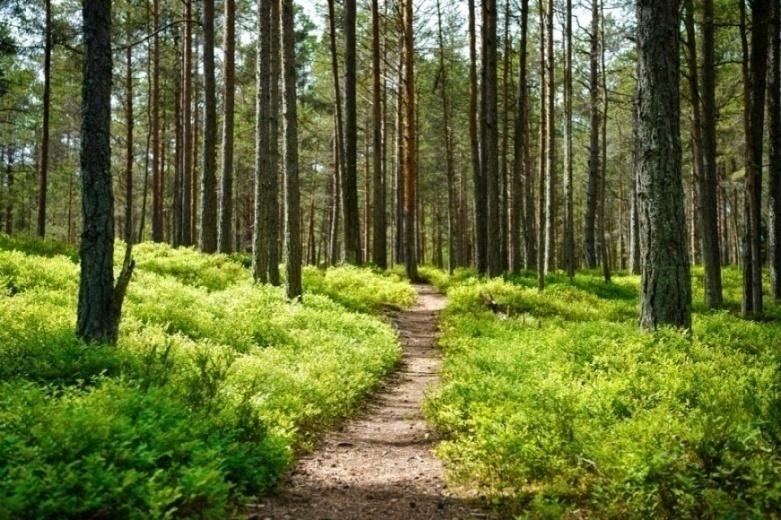 path began to get formed and it became bereft of the shrubs. It is easier to walk this path for people than form a new one.

Now, assume that you want to create a new path three feet to the left or right of this path and stop using this path. Can it be done? Yes, it can be done. But people will have to stop using this path and start walking on the shrubs where they want the new path to be. Will it get made in a day? Two days? No. It will take a while. But with regular usage only. It won’t do for people to give up midway and walk the old path. If that happens, neither will the new path be formed, nor will the old path be unformed. But if there is persistence, bit by bit, a new path will begin to emerge and the old path, due to disuse will start disappearing. Slowly. But after some time, one will not even know if the old path ever existed.

Rewiring the brain is like that. It involves breaking old patterns and forming new ones. The old path represents the habit you’re trying to break. The new path is the new habit. It is possible but it is not easy. But it can be done. 100 percent of the times, if the effort is put in. Stick to a new habit, despite it being difficult and despite the temptation of falling into the old one, and with sufficient practice, the old bad habit will have been eliminated and the new good habit will have been adopted. And that is when you would have succeeded in rewiring the brain.

Hence, the repetitive nature of the ROCD script will help in faster rewiring of the brain. The sooner you internalize the healthier response, the more adept you will become at offering it and dealing with your compulsions better. This is the rationale of the repetitiveness of the response prevention script.

In the next chapter we shall look at what progress in ERP means.