OCD or obsessive-compulsive disorder is a severely debilitating mental disorder that affects 2.5-3% of the population (Robbins, et al., 2019). Understanding the three words that make up obsessive-compulsive disorder can give us a better understanding of the disorder. The first word is obsessive, which comes from obsessions. Obsessions could be in the form of thoughts, images, impulses or urges (American Psychiatric Association, 2013), or even dreams, but for simplicity’s sake, we shall club them together and refer to them as thoughts. Obsessions are thoughts that are intrusive, disturbing and sticky.

These thoughts may cause unpleasant feelings such as extreme anxiety, guilt, sadness, boredom, restlessness, disgust, self-loathing, or self-criticism, which are again intrusive. Remember that these are just your emotions and these emotions are intrusive too. They accompany your intrusive thoughts and no matter what you do to make them go away, they don’t.

For example, you get a thought that you are not in love with your partner. That is an intrusive thought. When you talk to her, you either feel annoyed or bored. Your mind tells you, if you really loved her, you would not feel bored or annoyed. These emotions don’t go away when you try to make them go away.

Through trial and error, you may have identified some actions that initially help relieve the intrusive emotions caused by these thoughts and even make the thoughts come unstuck. These actions, which may be physical or mental, are compulsions. The second word compulsive comes from compulsions. Compulsions are physical or mental actions you may end up doing to neutralize your obsessions (American Psychiatric Association, 2013). For example, avoiding sharp objects to prevent hurting someone is a compulsion. Going back to check if you have locked the house door and checking it multiple times, is a compulsion. In ROCD, constant monitoring of your partner’s whereabouts, social media and mobile phone activity (to catch her in the act of cheating), is a compulsion.

Interestingly, everyone (even someone without OCD) has intrusive thoughts. Julien, et al. (2009) conducted a study with two groups – students and OCD patients, and found that both groups had intrusive thoughts. Abramowitz et al., (2014) quoted studies in their paper stating that up to 90% of people experience intrusive thoughts similar to obsessions in OCD.

Like, when you leave a restaurant, you may suddenly get an intrusive thought of having left your wallet or mobile phone back in the restaurant. It may cause you to quickly check if you do have the wallet or mobile phone on you. When you find that you do have it, you may forget about it. But for a person with OCD the thought may get obsessive and he may have to do the same compulsion repeatedly to deal with the obsession. The compulsion may provide temporary relief and then the obsession may return. This may lead to a repetitive cycle of obsession-anxiety-compulsion-and relief as shown in figure 1.4.1. 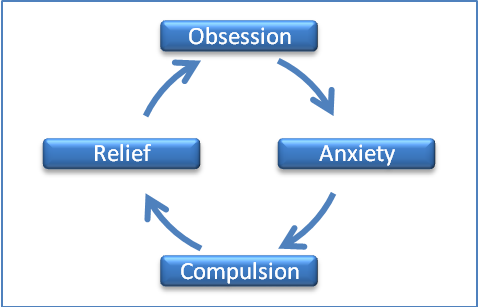 Eventually this cycle may repeat many times over and may begin to cause dysfunctionality. This dysfunctionality may extend to work, family, relationships, studies, or anything else that is important to him. That is when it becomes a disorder, which is the third word – disorder.

To recap, obsessions are intrusive, disturbing and sticky thoughts that may cause intrusive emotions. Compulsions are physical or mental actions that are performed to deal with the intrusive emotions. And disorder is when this cycle needs to be completed repeatedly, leading to dysfunctionality in various aspects of life.

Thus, an OCD sufferer may know that his thoughts about wanting to harm someone are irrational because he does not really want to harm anyone. But the thoughts are so strong that he may not be able to dismiss them. Further, he also knows that he should not be avoiding knives and other pointed objects but he cannot bring himself to handle these objects without becoming anxious.

People are often confused about what an obsession is and what a compulsion is. The confusion is caused by the presence of many mental compulsions. This may often lead to treating one like the other. In a disorder that is anyway confusing even if everything is laid out on a platter, such confusion about the building blocks itself can make the recovery process more difficult. I have therefore created an exercise to help you understand the difference.

Worksheet 1 has been provided for both of you to test yourselves on whether or not you can distinguish between obsessions and compulsions. Before moving to the next chapter, complete Worksheet 1 to get a better understanding of the difference. Move to the next chapter only if you have an accurate understanding of the difference between obsessions and compulsions.

In the next chapter we will look at a few types of OCD.