What happens to a sufferer when anxiety hits him? When anxiety hits a sufferer, he feels incapacitated. There are various physical and mental manifestations that may indicate anxiety. Some of these symptoms are:

More often than not, a person suffering from anxiety tries to repress the anxious thought and actually ends up making them worse. Repressing thoughts is the obvious thing to try and not be anxious but is actually counter-productive. When we try to repress our anxiety, we indulge in what are called ‘safety behaviours’. For example, when we are anxious around people, we may avoid interacting with them. This avoidance is an example of safety behaviour, as it keeps us safe from what we fear at the moment. But what do you think it results in? Does it ready us to face people the next time? No, it doesn’t. The fear gets further reinforced with each episode of avoidance. We should in fact, will ourselves to face the anxiety inducing stimulus (AIS) and desensitize ourselves to it. For OCD, this is called ERP.

How does desensitization work? With the first exposure to the AIS, the anxiety is at its peak. But if safety behaviours are not indulged in and the exposures are repeated, with increased duration and frequency of exposure, the anxiety soon reaches a tipping point, after which it starts reducing. This can be shown by the anxiety graph below: 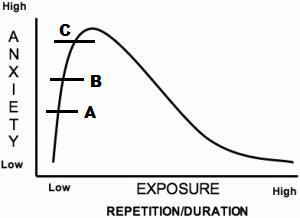 Most people when they suffer from anxiety, do not understand how they need to deal with it and intuitively try to save themselves from it by indulging in safety behaviours. These people do not let the anxiety go past point A in the graph.

The slightly more strong willed ones, who do not understand the nature of anxiety, but would want to face their fears, may go a little higher, say up to point B.

The people who become aware of how facing their AIS will lead to reduction in anxiety eventually, may face their anxiety up to point C in the graph. After that, when the anxiety gets too much, they retreat as well.

The few brave hearts who decide not to let their anxieties get the better of them are the ones who go past point C. A little more after point C, and the anxiety starts coming down. And their efforts pay off.

This happens, with repeated and prolonged exposure and it is easy to understand why some people give up midway. They get told that if they just tolerate the anxiety a bit more it will start coming down. But they do not see that happening, if they are somewhere between points A and B.

Hence it is important to understand that even though the anxiety may seem like it will kill you, you never know if just a little more will deliver you out of your misery.